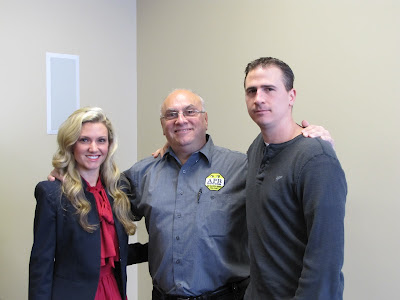 From the Staten Island SBDC

Steve Coppola started in the alarm business in July 1977 after being with the NYPD and as a deputy sheriff in Florida. He started his working career working with his father installing fireplaces. This created in Steve a strong feeling for the importance of a family working together. It was always Steve’s goal to create an atmosphere where he could work side by side with his family and he strived to do everything possible to make that happen. He, his daughter Pamela and son Stephen are proud to say that they enjoy coming to work each day.

Steve is the head of APB Security Systems located at 2047 Victory Boulevard, , Staten Island, NY. It is part of the family conglomerate which includes Statewide Fire Alarm Corp. a UL (under-writers laboratories) approved central station monitoring facility owned and managed by his daughter Pamela and Statewide Monitoring owned and managed by his son Steven. All three companies are headquartered in the Victory Boulevard building.

The companies have changed and grown significantly since inception. The company is a leader in the continuing changing technology. In the early days, the systems were composed of wires and foil on windows. In today’s advanced technology, items include audio detectors, radio detectors, as well as wireless systems that use transmitters to send signals back to the control panel, as well as to the central station, which will alert police and fire departments in case of an emergency.

APB recognized that they had to be more than an alarm installation business. They are in an industry where some competitors offer free systems and installation. Rather than adopting their competitor’s terms, they have chosen to emphasize quality and premium service. It has proven to be a winning combination based on result. The wholesale central station monitoring business has grown exponentially due to the integration of high tech electronics and computerization much of which has been developed by Steve’s son Steven. This business continues to grow through both their stellar reputation and their acquisitions of competitors. To prove that they are the place to work in the security industry, over 70% of the employees acquired through acquisition have chosen to stay on.

Pamela handles the finances for all three companies. She is a member of various organizations such as the Staten Island Women’s Leadership Council, the Manhattan Chamber of Commerce and the Staten Island Economic Development Corporation. In 2005, Pamela was a winner of the “Make Mine a Million” business program founded by Open from American Express which is now a national movement encouraging women entrepreneurs to grow their business to the next level. In 2006, Pamela was named by the New York Daily News as one of the “30 under 30” to make 2007 “The Year of the Money.”

In 2002, Statewide Fire was started. It is only one of some 20 companies licensed to operate an approved Central Station by the NYC Fire Department. It is a female owned enterprise with WMBE Certification, which helps alarm dealers when they must show a percentage of their project is being handled by minority or woman owned firms. The company offers a full range of commercial and industrial applications ranging from small hotels, apartment buildings, and private schools to large industrial/commercial complexes with multiple locations

Some of their more recognizable clients or projects include The Richmond County Ball Park (home of the “Staten Island Yankees,”) the NYC Board of Education, Project Hospitality, the YMCA and many others.

Steven, Pamela and Steven are pillars of the Staten Island Community and have been so for many years. They currently employ 35 employees and plans are underway to expand their building so they may hire additional employees. In a time when other small businesses are contracting, they are expanding. The SBDC is currently exploring a one half million dollart 504 or 7A loan for their expansion.

The Coppolas have recently embarked on an expansion project. They are currently in the market for a 504 loan to expand their facilities in order to accommodate additional employees. They in the past have been a recipient of one hundred thousand dollar 7a loan. Steve is an active member of the SBDC Executive Roundtable.