Showing posts from May, 2006
Show all

What Time Is It?

Here's the current time in places all over the world. I suppose one could just find out the UTC (Coordinated Universal Time), a/k/a Greenwich Mean Time or Zulu Time, and subtract five for the eastern U.S. Except that Britain is currently on Daylight Saving Time, which started a week before the United States in 2006. Except that DST will start the second weekend in MARCH in the U.S. in 2007. BTW, Australia went OFF DST the same weekend the US went ON DST this year. Of course, parts of the U.S. (Hawaii, American Samoa, Guam, Puerto Rico, the Virgin Islands, the parts of Arizona not controlled by the Navajo) DON'T go to DST. Starting in 2006, all of Indiana is now on DST. Thus, the web link. Note, that it's Daylight Saving Time, not Savings - it's a common mistake.
Post a Comment
Read more

Darrin and Suzy Are Gettin' Hitched 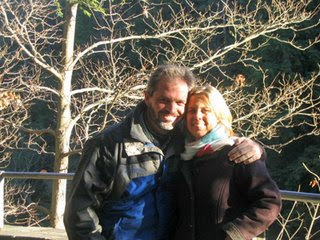 Old Norwegian bachelor farmer Darrin Conroy is getting married tomorrow. O.K., he's not that old, I'm fairly certain he's not Norwegian, and his horticultural skills may be in question. But Darrin and Suzy are indeed tying the knot. They became good friends some years ago when they worked in the same building, before it evolved into romance. Before he left work Wednesday, I reminded Darrin not to forget to breathe tomorrow. He indicated that was the exact same advice he got when he went skydiving, almost exactly a decade ago. He wondered if there was a relationship between matrimony and skydiving. I say Yes - both involve jumping, one the broom, the other, out of the plane. Even though it will be a Christian wedding, both Suzy and Darrin have agreed to take the Buddhist approach to the busyness that leads up to the ceremony and take it as it comes. If you'd like to contact Darrin, please be aware that he'll be out of the office until June 8. If you call him, the
1 comment
Read more

By Josée Fonseca - May 24, 2006
While driving to work on Monday, I was listening to a story on Market Place on NPR called Chasing Innovation by Scott Jagow. It started off discussing research & development departments of large business and how things have changed from striving to maintain secrets and maintain the lead to finding new ways to be competitive. This broadcast discusses how huge companies like Proctor & Gamble are looking to small businesses for their next best thing. The transcript is available on American Public Media . With small businesses always looking at how to get their products marketed, this feature offers some advice on what partnering with the likes of P&G can offer as well as how the entrepreneur should protect him/herself.
Post a Comment
Read more

Meetings: we can't stand them, but we don't seem able to live without them. Either the meeeings are pointless, overlong, or all top down. You sit there waiting for that three minutes of a kernel of an idea that made your hour and and a half investment marginally valuable. Perhaps these articles from BNET can help. Registration is required, but it's free. Reinventing The Staff Meeting Solutions At A Meeting Meeting-Speak: What to Say and How to Say It Take A Hike - Planning Dynamic Business Meetings The Gang's All Here We've Got to Have a Meeting. How Do We Ensure that It Is Productive?
Post a Comment
Read more

By Darrin Conroy - May 22, 2006
Last December, you might remember that the SBDC's 2004 publication "What's Your Signage?" was recognized by the New York Library Association as being one of two winners of the 2004 New York State Notable Documents Award. Each May, the Library Journal announces winners of Notable Documents from Federal, State, and International agencies. Among other nice things, our earlier recognition resulted in the book being entered into this competition. I'm happy (and humbled) to announce, then, that, on May 15th, I received word that "What's Your Signage?" was designated as being one of the most Notable Government Documents in the U.S. in the State category, one of only 10 winners so honored. One of the judges remarked that "it has been a while" since New York had a document on the list. (If you care to know of the others, there's a lengthy article here: http://www.libraryjournal.com/article/CA6332169.html .) The Library Journal is the pr
Post a Comment
Read more

You're writing something and you discover you have been using the same word repeatedly. Do you reach for a dictionary or a thesaurus? Maybe. Anoother possibility is to go to the Word Web dictionary and word finder of over 280,000 words and phrases. A free software version at the site adds proper nouns, pronounciations and more definitions. There's also a paid version ($19) which allows for wild card word searches, the ability to solve anagrams and more. I found the information above in a magazine called Searcher: The Magazine for Database Professional. Each month, there is at least one free article online: April 2006: The People’s Law: Free Legal Help and Legal Research on the Web with a list of sites. March 2006: Wikipedia and Britannica: The Kid’s All Right (And So’s the Old Man) January 2006: Shhh!!: Keeping Current on Government Secrecy November/December 2005: Another Phine Kettle of Phish: Identity Theft Prevention
Post a Comment
Read more

A Period of Transition

By Darrin Conroy - May 15, 2006
We're here in our new library space, located with the rest of SBDC Central. As you know, we're now out of downtown Albany, which has its pluses (no more listening to car alarms beeping incessantly outside my window), and its disadvantages. Nonetheless, our computers are working, the phones & e-mail are in order, and the library books -mail is back & running, so we can communicate with the outside world. Back to reference tomorrow!
Post a Comment
Read more

The recent SBDC conference in Catskill reminded me of a tool I use for ring studies. Go to http://www2.easidemographics.com/ . Click on FREE Census Reports. You'll have to register with your e-mail and ZIP Code, but that's free as well. Pick EASI Ring Studies Site Selection with Maps. You can pick one or three rings. Pick a report - try the Free Complete Report. Filling in the report name is optional. You need the latitude and longitude of what you want to study, so plug in the street address, and click on Find Address Coordinates. (You CAN'T use "the corner of Trade and Tryon".) With the next fields filled out, click on Create Site Study. Voila; the report is done. There is also some mapping capacities here and elsewhere in the site. There is also Rank Analysis (e.g., the counties with the greatest number of people with Masters Degrees, or with an Asian population.)
Post a Comment
Read more

By Josée Fonseca - May 03, 2006
Sphere touts itself as an improved search tool for blogs, promising current and relevant results. One thing about it is it indexes entire sites and so your search term may only be mentioned in a blog. When I typed in SBDC, I got a list of mentions emboldened, with the name of the site, how long ago it appeared and a profile in the form of a pop-up that includes average posts per week, and the last 3 links in. The first in the queue was Roger’s blog, and various other mentions of SBDCs around the country. Some other search tools of interest? Talk Digger our website came up in a mention about our veteran’s program. Blogdigger http://www.nyssbdc.org/ did not appear in a simple search but a search on sbdc brought up a mention about the SBIR conference. Google Blog Search brought up mentions of sbdc and the url in various blogs.
Post a Comment
Read more

The American Time Use Survey (ATUS) measures the amount of time people spend doing various activities, such as paid work, childcare, volunteering, commuting, and socializing. It is a relatively new survey from the U.S. Department of Labor's Bureau of Labor Statistics, and there are changes from the 2003 to the 2004 questionnnaire, so there are not always comparable figures. Much of the data are in ZIP files, and frankly, I found it to be quite cumbersome. Another source of this type of information can be found in this 2001 Harris poll , something you can actually read right away.
Post a Comment
Read more
More posts